This year in early February I had learned that Amazon introduced a new category where it was providing it’s customers with stuff you can buy off the shelves at your local supermarket such as drinks, canned food and ingredients.

It was a great idea and a very good way to do your shopping for most of the items you use on a daily basis. The products sold within Amazon’s supermarket were labeled as “Plus” products and assumed a minimum purchase of 20 euros in order to be delivered. On top of that, getting an Amazon Premium (Spanish version of Prime) subscription for 19 euros/year insured free shipping on all orders.

However, the most important benefit for the customer was the fact that you could purchase the same products you’d usually get in a supermarket at the same price, but get them delivered to your door for a yearly fee thus sparing your time.

But as it turns out like every other good thing this didn’t last too long because Amazon just ditched most of their “Plus” products and either started offering them with additional costs or through a new service called “Amazon Pantry” which comes with a 3.99 euros as delivery fee. And with “Amazon Pantry” there’s a catch given that the delivery fee isn’t charged on a per order basis but actually on a per box basis as each box can carry a limited volume of content.

Enough with the talking, let’s see some examples:

Here’s a bottle of basic natural/mineral water, sold by Amazon for 0,67 euros the bottle as a “Plus” product back in September:

And here’s the same water sold by the same vendor on Amazon for 2.05 euros the 1L bottle with an additional 4.36 euros as delivery cost:

5L bottle of plain water, previously sold as a “Plus” product for 0.89 euros is now sold as an “Amazon Pantry” product which assumes the 3.99 euros delivery fee per box. 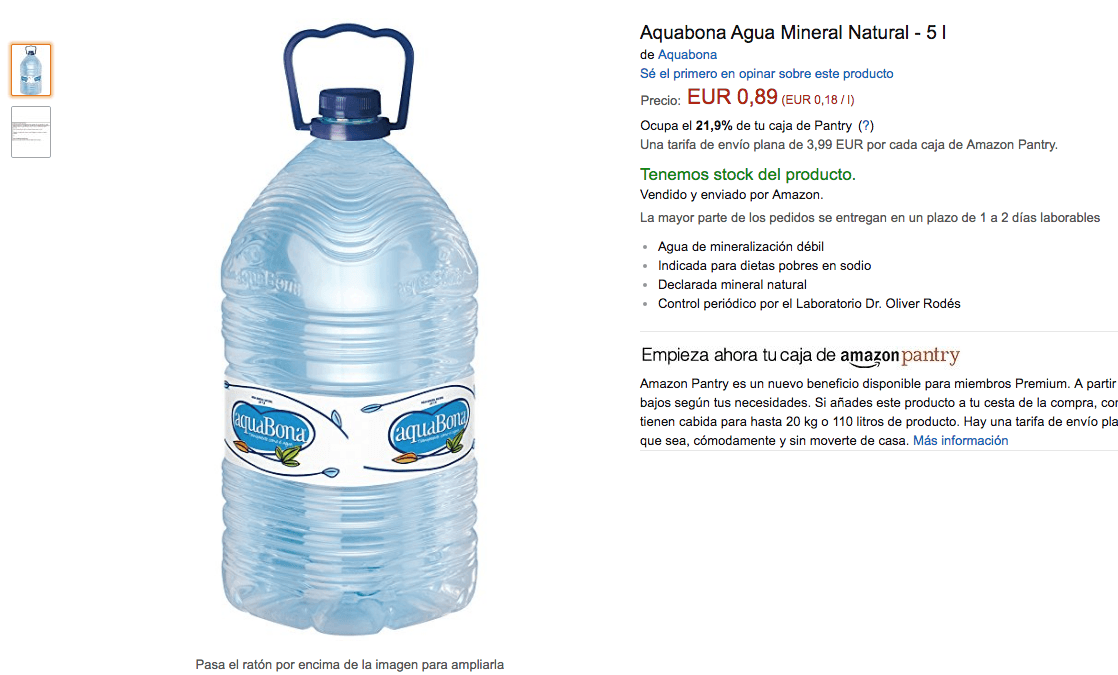 As per Amazon’s estimate this product alone occupies 21.9% of the “Amazon Pantry” box which means that you can buy 4 bottles to fit one box. 4 bottles cost 3.56 euros while the delivery costs 3.99 euros, higher than the product itself which means that ordering this basic product from Amazon would double it’s price compared to the same product bought from the local supermarket’s shelves.

While I’m well aware that logistics has it’s costs which could just as well be elevated, employing such a deceptive strategy to make customers engage and then doubling the costs is just a lame business model which will most probably backfire at Amazon.

No Responses to “Amazon killed the supermarket”