I was in desperate need of a bookmark manager. I tried Shaarli, but it sucks for two reasons. The first one is the use of Sqlite3 database and the second is very thin error reporting and debugging options.

Since I didn’t have the time and the nerves to fix someone’s obsolete code I went ahead and searched using Google for self hosted bookmarking managers. I came across a Github repository full of links to self hosted scripts and among those I found Lobster.rs.

Since I had a Debian 8 server with HaProxy already running for some reverse proxy and firewalling purpose I decided to install Lobste.rs there in order to avoid causing issues with other apps or webserver setups.

Now, you might say that the installation instructions within the Github repo of Lobste.rs are pretty straight forward, but that’s not quite the case. Moreover I wanted to do the install using MariaDB 10 and Let’s Encrypt which implies a different setup from the one listed by default.

First things first. We update and upgrade the system using apt to insure that we got up to date software versions:

Then we need to install Ruby, Rails & Git:

Now that we have all these installed we get MariaDB installed and the library needed to use RoR with it. To install MariaDB we just need to issue the following commands (up to date instructions can be found here):

Throughout the install process you’ll be asked to set the root password so make sure that you’ve set a strong one.

Now in order to make sure that the mysql2 gem gets the correct MySQL client library version installed we must install the libmariadbclient-dev package:

Next, because we also need SSL support we’ll be installing the libssl-dev package:

To spare time and resources you can also install the packages together as it doesn’t matter.

Once everything is installed we can begin with installing Lobste.rs and the first thing we need to do is to switch to the directory where we want to place Lobste.rs. I chose my homedir:

Then we can follow the instructions on the official repo to install:

This will clone the Lobste.rs repo and we can start compiling the gems next by executing one simple command:

If all was installed properly prior to cloning the repository then we shouldn’t get any errors through this step. If you run everything as root you’ll be warned of potential issues and I strongly advise against running everything as root unless you know what you’re doing. Every task listed before the actual install of Lobste.rs needs to be done as root, it’s mandatory, but the rest could and should be executed as any username with shell privileges.

Once the gems are compiled we can move onto creating our Lobste.rs MySQL database. First we should login using the MySQL root password (which we’ve set when MariaDB was installed). Execute this command and you’ll be prompted for the password:

After the password is entered correctly you’ll be taken to the MySQL console and you can now execute commands via MySQL. There are three steps to take in order to create the database:

NOTE: Replace “some-password” above with a password of your choice and make it strong!

To sync the changes and make them active just run in the MySQL console: flush privileges;

Then exit the console using: quit

Back in the Linux shell we continue with the Lobste.rs install instructions and create the config/database.yml file with the following entries:

The database and username values must be consistent with those created via the MySQL console, while “some-password” must be the same password as you set for the MySQL username via the MySQL console. Also because the install of MariaDB does not use the Linux socket by default, but actually the hostname/port configuration we’ll be replacing the “socket:” value in the original install instructions with “host:”.

We continue with the official instructions, but we prepend “bundle exec” before each rake command as it won’t work otherwise:

First we load the schema into the database:

Next we create a randomly generated key:

And we create a file called config/initializers/secret_token.rb with the following contents:

Now we have to create another config file called config/initializers/production.rb where we define the site title and the domain name to be used:

Once this is completed all we have to do is to seed the database so that we get a default username, password and tag created:

The output of executing this command should be as follows:

So far so good, now all that’s left to do is to get the Rails server running by executing:

The server should now start and the Lobste.rs will be available on port 3000. Just fire up the domain you’ve set followed by port 3000 in a browser and you’ll get to the homepage of Lobste.rs. Login using username test and password test and by clicking the username you can set your profile to whatever you like.

Because we want the Rails server to be running in case we reboot we move onto cronjobs as we have to create 3 cronjobs,  two for Lobste.rs and one for Rails:

Edit the user’s cron file by pasting the crons listed above and save. Make sure that you set the path to the Lobste.rs install correctly.

To keep things simple for those wanting just the basic install I will stop here and will do a different tutorial for HaProxy, Let’s Encrypt, inserting tags and styling.

A screenshot of what you’ll get after filling in your bookmarks can be found below: 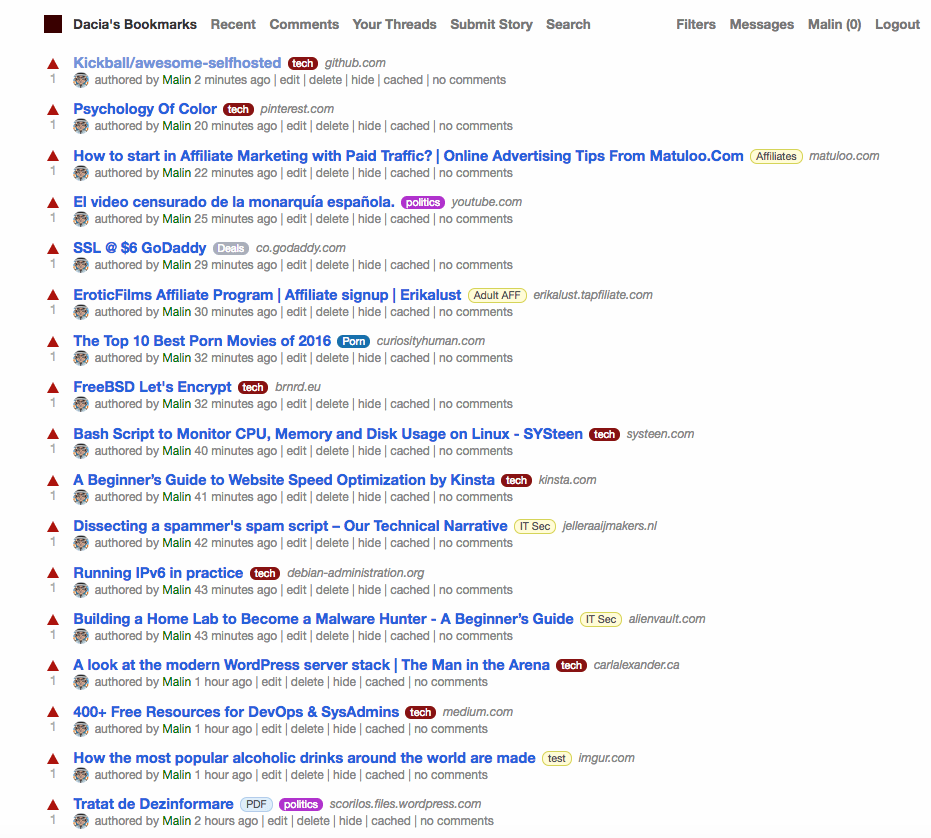 No Responses to “Install Lobste.rs on Debian 8”