The folks over at Torrent Freak speak of “the end of an era” after Torrentz.eu announced that they are closing down after 13 years online and they are just about right on the topic, not only in what concerns Torrentz.eu, but torrenting in general.

With the ongoing battle and witch hunt against TPB, the ongoing harassment of DMCA trolls and overall ongoing battle of individual content creators and unions against the torrent sites and all the technology behind them it’s more than obvious that with enough legal reforms and with lack of comprehension and support from the general public the torrent industry as we know it today is going down.

A report surfaced these days listing the top countries downloading pirated stuff from torrents with 10 European countries topping the list, 9 of them being part of the European Union who is supposedly fighting against piracy with all resources: 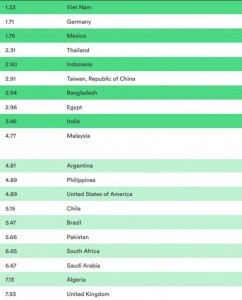 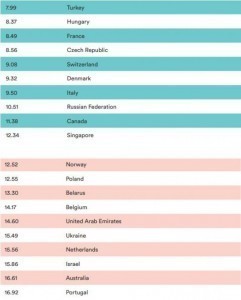 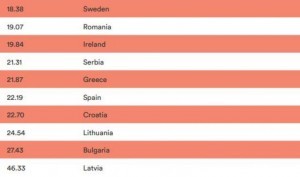 (the top 50 countries from least to most – source)

So you’re probably asking why I think the torrenting scene as we know it is fading? Well the answer is pretty obvious and easy to understand. The people behind torrent sites have no real allies although 99% of the internet users have pirated at least once. Not all of them may have downloaded the latest box office hit, but at least once in their internet use they downloaded a shitty picture to use on some project or copied certain ideas or content for their work, school or business. And by today’s laws and legal criteria that’s piracy too.

And piracy is a crime so you cannot see 10000 internet users in the streets protesting in favor of doing a crime especially if they do it on a frequent basis simply because by exposing themselves they can be traced back, monitored and then charged. Any form of direct support for torrenting sites and torrent site owners represents probable cause and it’s enough to warrant some form of police investigation.

On the other hand, people making money from torrents because torrents just like blogs, news portals and other content creation websites are built with the scope of making money, will not risk exposint themselves in supporting their colleagues, just because if they do that they will be sitting ducks.

So what’s next? Well the torrenting scene must transform, because torrenting isn’t really for everyone and torrent platforms, meta search engines and all this stuff needs to go underground and once torrenting will no longer be public the things might settle. Indeed going for private trackers could mean less income for those that are behind the torrent contents, but what’s good making a fortune if they prove it was made illegally and take it from you or if you spend the rest of your life in jail?

This is why Torrentz.eu closed down and many others will follow soon.

No Responses to “The end of an era?”