Home / /dev/null/ / The forums deserve to die
Tweet Pin It

There was a time, about 10 years back when the forums were very popular. In fact I believe that 10 years ago the forums were as popular as blogs are nowadays. Everyone wanted to have a forum, but only a few mastered the art of getting tons of people together on a discussion board using phpBB, vBulletin or SMF.

However with the growing popularity of social media sites and with the appearance of blogs most forums started to die slowly and nowadays it seems to me that the most active are those of some local communities and those related to warez.

The vast majority of forums where I was active 10 years ago have either disappeared or started to die slowly until their activity became less interesting and I started to ditch them, or on the contrary, from professional forums they turned into political battle forums like it happened to GFY.

Others have turned into places that are now full of newbies asking questions that belong on Stackoverflow and which nobody answers. While others are just lame due to the stupid ideas and attitude of their owners.

Most folks think that running a forum means installing a theme on top of phpBB or other board software, begging for a logo then creating 100 post yourself with fake profiles and paying $0.10 folks from Slavelabour to reply to those posts so that the popularity of the forum grows. And when it grows and it becomes flooded with all sorts of spam the forum admin starts to impose all sorts of rules in order to protect himself from spam instead of actually doing the right thing and securing his joint using a proactive spam filter.

Well the thing is that real spam filtering costs money and it’s easier and cheaper to annoy people with your stupid rules instead.

Long story short, I came across a new forum the other day and saw a section with special interest to me. There were a couple of posts where I wanted to add my experience and expertise and obviously get some feedback for that so with that in mind I signed up, but after signing up I realized that the forum had a stupid rule that prevents new users from posting in all sections with the exception of one, a newbie section where you were supposed to send 3 replies and get 3 likes to your replies before being allowed to reply into other sections.

Now the first thought was: what the hell would you be able to reply into a newbie sections with all sorts of lame ass questions in order to get three likes? Exactly! Nothing. But still, I did my best and created six replies which brought me in two days a total of two likes. LOL!

When I came back yesterday I noticed that there was a sub-section for introductions where I wrote a small introduction telling people why I joined the forum in hopes that I will get that one more like to clear my access to the rest of the board, but instead the forum admin removed my post reasoning that what I did was a low-effort intro, because hell yea I was supposed to write the story of my life on a public forum.

So with the dice on the table I wrote another introductory post telling the guy what he needs to hear because I’m not gonna beg to get access: 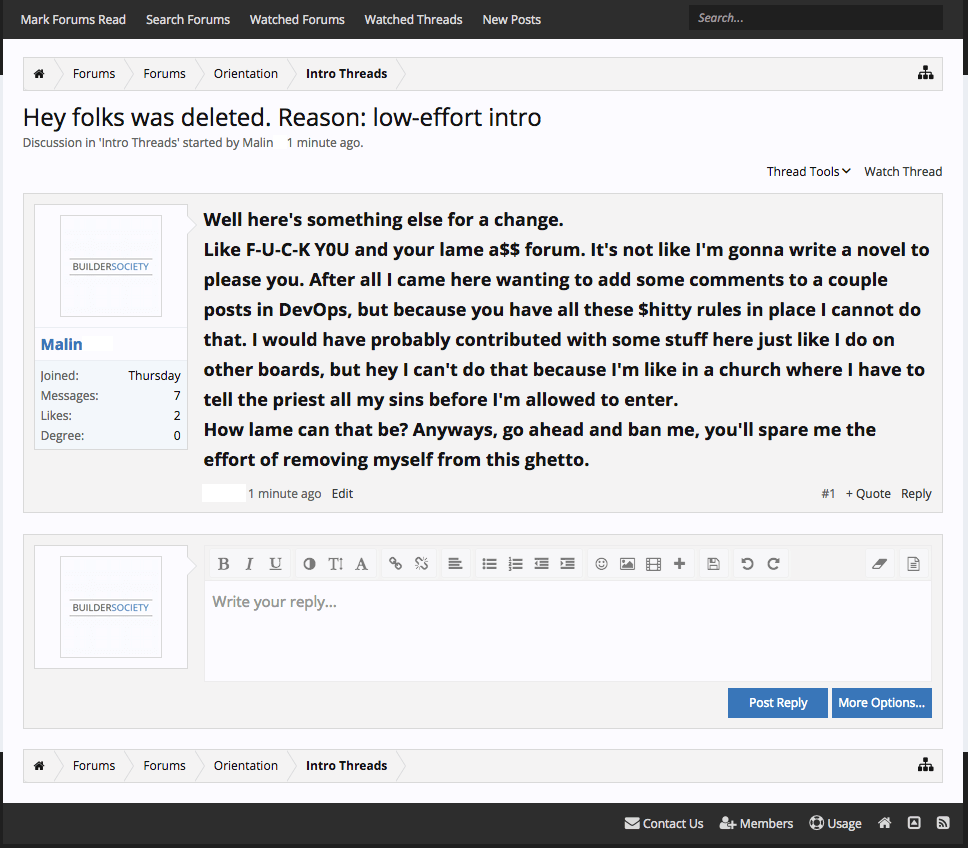 So yea’ this is why most forums deserve to die nowadays, because they are run by idiots who think they are actually doing people a favor by running such boards and forget that their main purpose is to get some $$$ out of it instead.